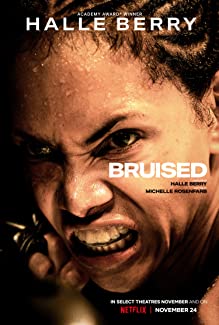 Bruised 2021 HDRip
Plot: Jackie Justice is a mixed martial arts fighter who leaves the sport in disgrace. Down on her luck and simmering with rage and regret years after the fight, she’s coaxed into a brutal underground fight by her manager and boyfriend Desi and grabs the attention of a fight league promoter who promises Jackie a life back in the Octagon. But the road to redemption becomes unexpectedly personal when Manny – the son she gave up as an infant – shows up at her doorstep. A triumphant story of a fighter who reclaims her power, in and out of the ring, when everyone has counted her out.
Genre: Drama | Sport
https://www.imdb.com/title/tt8310474/
Directed by: Halle Berry
Starring: Stephen McKinley Henderson , Halle Berry , Shamier Anderson
Release Name: Bruised.2021.HDRip.XviD.AC3-EVO
Size: 1.36GB
Video: AVI | 720×300 | 1 400 kb/s
Audio: English | AC3 | 192 kb/s
Runtime: 2 h 4 min
Samples:  #1 – #2 – #3